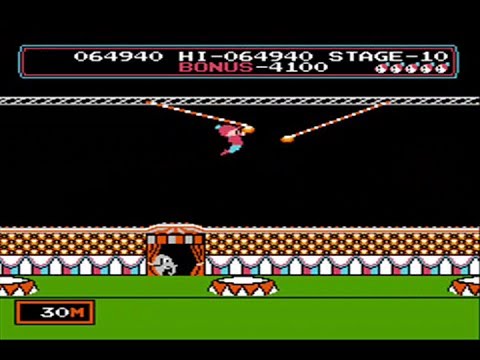 Make sure you follow me on dailymotion for exclusive videos.

Circus Charlie (Sākasu Chārī?) is an action/platform game originally released by Konami in which the player controls a clown named Charlie. The game was a hit arcade game in 1984, which also had a successful release on the MSX in 1984, the Nintendo Famicom in 1986 by Soft Pro and on the Commodore 64 in 1987. It was released along with other Konami classic games on the Nintendo DS compilation Konami Classics Series: Arcade Hits.In the game there are six regular stages (plus an extra stage) of differing tasks that are to be completed by Charlie. Grabbing money bags, performing dangerous tricks, avoiding enemies,

completing stages, etc., earns Charlie points and a bonus for a classic reward.After the sixth stage is completed, the game starts over again but with a faster pace and more difficult (but exactly the same in terms of task to be completed) levels.Charlie also races against time. Bonus points are awarded according to the time remaining, but running out of time will cost the player a life.In the “Level Select” version of the game, the player can choose any of the stages to play, but only a limited number of times each, whereupon the level will become unselectable. There is no “ending” to the game—after the first five levels have each

been played to their limit, the player then repeats the trapeze stage until all his lives are exhausted.In the Famicom version, the trampoline stage is omitted, but it has a “B” mode, in which all the levels are repeated with added difficulty. The game often shows up on Famicom clone systems and multicarts, usually with its title screen altered to remove copyright, some versions also have the levels split up to make up separate games in multicarts.The standard Arcade version has 6 levels in total. Level 1, 2, 4 and 5 have 5 sublevels. Level 3 contains 7 sublevels. Each sublevel gets more difficult. Level 6 also has 5 sublevels, but repeats as l