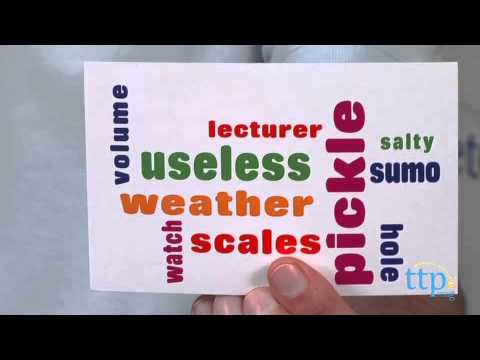 For the full review, where it’s in stock, and how much it costs, visit

Oddly Obvious is a game where all the answers are right in plain sight the entire time. The object of the game is to be the first team or player to collect five cards. You collect cards by correctly guessing words and earning tokens. To play, one player acts as the host to read clues from the cards. On the front of each card there is a jumble of words. On the back side of each card are two groups of clues. Choose only one clue group per card. The host reads the appropriate clues one at a time, and the other players try to select the word on the front of the card that corresponds with the clue. For example, a clue could be “the climate of the hour” and the corresponding word is “weather”. The first player to correctly shout out the correct answer earns a token. Play continues in this format until all five clues for the round have been read (and all five tokens have been won). At the end of the round, the team/player with the most tokens wins that card. Continue playing until one team or player has won five cards.

Oddly Obvious comes with five tokens, 196 game cards, and a card stand. The game is for three or more players.