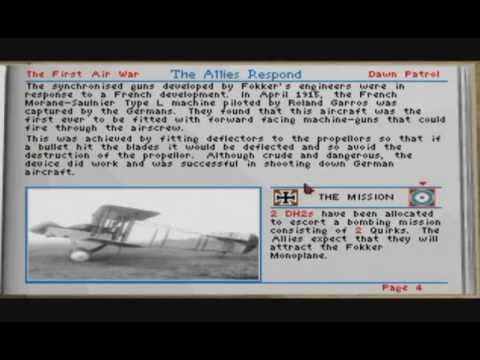 Dawn Patrol is a WWI flight simulatorinteractive history book created by Rowan Software in 1994 for the Commodore Amiga and MS Dos. Unlike most games of the same genre, Dawn Patrol differed in that it had no campaign, but instead allowed players to fly historical or semi-historical missions from WWI. The menu was in the form of a book, and had the player type in the page number to move around. It actually contains a fair amount of information for a video game, covering nearly every aspect of the air war. The graphics are also excellent for a Dos based game, with a sort of virtual cockpit and decent damage effects. All the cockpits look the same however, taking away some of the historical feel of the game. There was no multiplayer originally, but later on a multiplayer version of the game was added. This video covers a quick fight between a D.H.2 and a Fokker E. III.