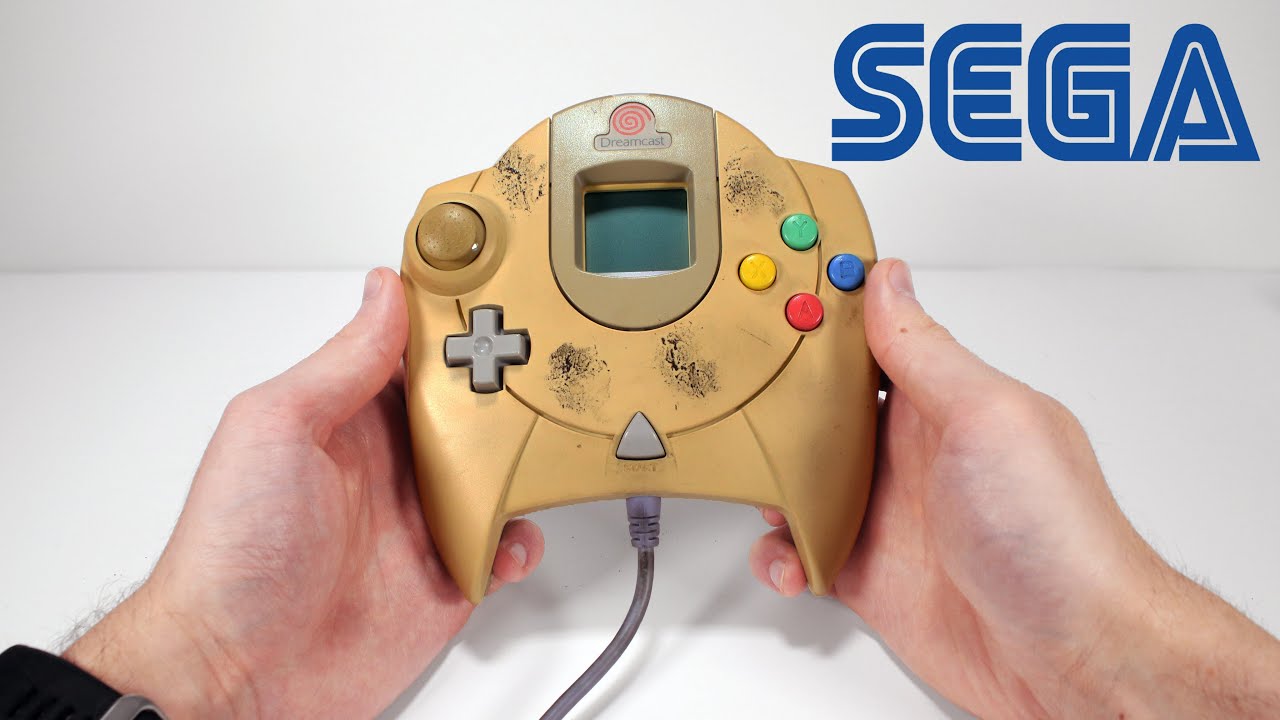 Restoration of badly a yellowed Sega dreamcast controller and VMU for the extremely yellowed Dreamcast console I restored earlier. Like the console this unit also has only cosmetic defects. There are some glue reside from stickers and the yellowing is pretty bad.

Unlike many other consoles, the Dreamcast plugs memorycards to the controller. They have many other uses also. These same ports can also be used to attach a rumble pack and probably some other accessories as well.

I took the controller and VMU (memory card) apart and there was some dust etc. inside but otherwise it looked fine. However I had an issue of some of the yellowed parts containing metal pieces that would be ruined if I sunk them in hydrogen peroxide. I found that the de-yellowing process also works in only sunlight, but it is painfully slow. In addition I don’t have many hours of sun outside in december. So I decided to try my UV-light system only on the parts. Why I didn’t put all the parts in. Even though the parts are white the reflect a lot less UV-light than the foil around the box. if these other parts absorb the light the amount of UV-absorbed by the parts with metal pieces per hours decreases and it would take me longer to do this. And even now it took me almost a week.

The parts that could be sunken in hydrogen peroxide were sunken an it took me a day to get rid of the yellowing, which was worst on these parts. Who know how long it would have taken me if I did it without hydrogen peroxide. Before de-yellowing I washed the parts in soapy water and cleaned the glue residues with lighter fluid as many comments have suggested.

All the electronic components were cleaned with isopropyl alcohol. Mine is over 99%. It has almost no waster so it wont corrode the boards. Alcohols are also good at dissolving both water and oil soluble substances. After everything was nice and looking new I let it dry (after washing the h202 off) and put it back together.

Thanks for watching. If you like my videos, please consider subscribing!

The bellow links to amazon are affiliate link. I get a small fee of anything you buy after clicking them, but you pay no more than without clicking. This is a great way to support my channel.

Check out my new Instagram:
T-Shirts:
Support me on Patreon: