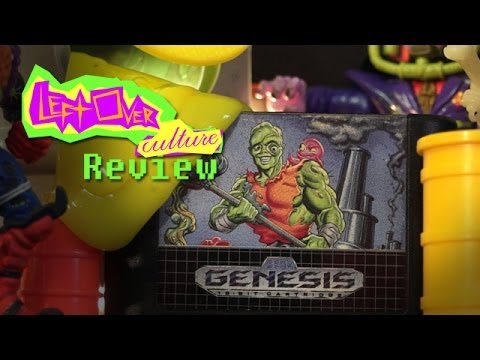 Toxic Crusaders for the Sega Genesis brings me back right to beginning of the Leftover Culture Review; checking out retro video games in the guise of these are new in Australia because we’re so far behind.

The difference is we were just left out… But with the Internet and eBay firmly placed in our 21st century tool-belts, I can finally discover this awesomely 90s franchise and genuinely get excited about some pure Leftover Culture that I have only just discovered.

Toxic Crusaders is a cartoon-franchise based off the R-rated Troma movie series Toxic Avenger. In the same vein as cartoons like Teenage Mutant Ninja Turtles. They even had their Playmates toy line which you can check out here;

So the Toxic Crusaders got games on the Nintendo (NES), Game Boy and the Sega Genesis. Personally, I was a little surprised by the Sega Genesis version and I really wanted to shine a spotlight on this multiplayer beat ’em up that often gets overshadowed by its Nintendo counterparts.

Toxic Crusaders is obviously a really flawed game. A cash-in on a franchise that never went far, but it’s a game that brings a lot of charm and characters from the cartoon series.

Check out the Toxic Crusaders Action Figures at the LOCR official website;